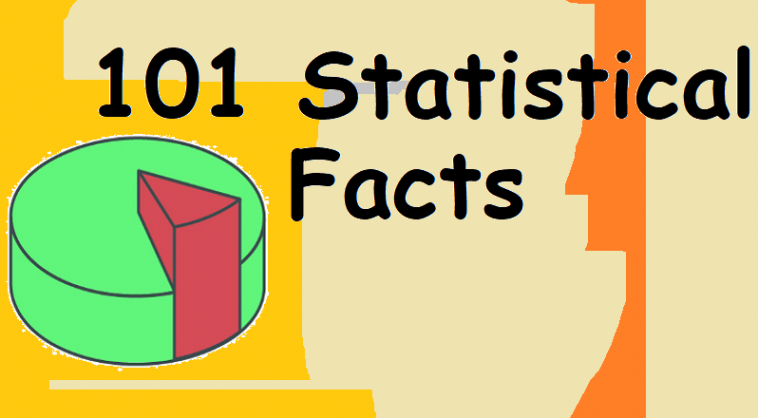 For making learning easy we use statistical ways, which make learning way easier. Not only that we used to compare things and object statistically like “If your DNA was stretched out it would reach to the moon 6,000 times“. Because of our love in mathematics here are 101 Statistical Facts that will surely make you think.

Dolphin’s can detect underwater sounds from 24 km (15 miles) away.

11% of people are left-handed.

Augusta has the highest percentage of births.

Iceland consumes more Coca Cola than any other country.

The word ‘almost’ is the longest word spelled alphabetically.

More people are allergic to cows milk than any other food.

More people are killed by bees than snakes.

The Atlantic Ocean is saltier than the Pacific.

Your mouth produces 1 liter of saliva a day.

If your DNA was stretched out it would reach to the moon 6,000 times.

You begin to feel thirsty when your body loses 1% of water.

Not all your taste buds are on our tongue (10% are on the insides of your cheeks).

The smallest dog is the Chihuahua.

There are 70 million sheep in New Zealand (with 4 million people).

The worlds smallest bird is the ‘bee hummingbird’ found in Cuba.

Men are struck by lightning 7 times more than women.

Women make up 49% of the world’s population.

1 billion snails are served in restaurants each year.

8% of people have an extra rib.

85% of plant life is found in the ocean.

The Hawaiian alphabet has 13 letters.

The most commonly used a letter in the alphabet is E.

The 3 most common languages in the world are Mandarin Chinese, Spanish, and English.

The smallest bones in the human body are found in your ear.

Cats spend 66% of their life asleep.

Switzerland eats the most chocolate equating to 10 kilos per person per year.

Money is the number one thing that couples argue about.

Stewardesses are the longest word that is typed with only the left hand.

Women blink twice as much as men.

Scotland has the most redheads.

The naming of tropical storms and hurricanes officially began in 1953.

India has the most post offices than any other country (over 100,000).

The Taj Mahal in India is made entirely out of marble.

Bali has the worlds largest variety of flora.

Every single possible 3 characters .com domain has been registered.

The word ‘uncopyrightable’ is the only 15 letter word that can be spelled without repeating any letter.

The word typewriter is the longest word that can be typed using only the top row of a keyboard.

An egg contains every vitamin except vitamin C.

When water freezes it expands by 9%.

Your foot and your forearm are the samelengthsh.

Diamonds are the hardest natural substance.

A piece of paper cannot be folded more than 7 times.

The opposite sides of a die always add up to 7.

Buckingham Palace has over 600 rooms.

Honey is the only natural food which never spoils.

The only continent with no active volcanoes is Australia.

Hippopotamuses have killed more people in Africa than any other animal.

The Arctic Ocean is the smallest in the world.

The most common mental illnesses are anxiety and depression.

Your skin is the largest organ making up the human body.

Every day is a holiday somewhere in the world.

There are 22 stars in the Paramount studios logo.

In a deck of cards, the king of hearts is the only king without a mustache.

Black on yellow are the 2 colors with the strongest impact.

The safest car color is white.

The most commonly forgotten item for travelers is their toothbrush.

Apples are more effective at waking you up in the morning than coffee.

There are only 4 words in the English language which end in ‘dous’ (they are: hazardous, horrendous, stupendous and tremendous).

The oldest word in the English language is ‘town’.

About 90% of the world’s population kisses

Toilets use 35% of indoor water use

Koalas sleep around 18 hours a day

All insects have 6 legs

The Grand Canyon can hold around 900 trillion footballs

Cats have over 100 vocal cords

It’s possible to lead a cow upstairs but not down

Elephants are the only mammal that can’t jump

Your tongue is the fastest healing part of your body

On your birthday you share it with 9 million others

Hummingbirds are the only bird that can fly backwards

A hummingbird’s heart beats at over a 1,000 times a minute

Dragonflies have 6 legs but can’t walk 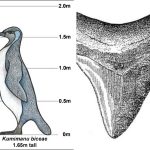 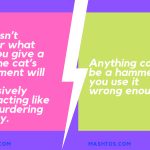