With the intensive use of the Internet today, it has become essential to use a router at home or apartment to manage the numerous simultaneous Internet connections of all the connected devices that one uses.

But do you really know how these devices work and what they are used for in our recent networks? Can you easily choose one among the hundreds of references offered?

What is a WiFi Router?

The WiFi router is a crucial device in your home network installation. This is the device that allows you to connect several computers to your internet access.

The router operates on layer 3 of the OSI model, the network layer.

The router uses a routing protocol, which allows it to communicate with other routers and exchange information with them to know which route will be the best to send data.

The router has multiple more or less complex uses. In its most common use, a router allows several computers to take advantage of the same internet connection (at home or in the office, for example). Thus, the router works as a receiver of the Internet connection to take care of distributing it to all the devices connected to it. Thus the Internet network is connected to a smaller local network managed by the router.

WiFi routers typically use these components:

How to choose a router?

These are the two most important things to choose a router, but it depends on the processor installed, the optimizations brought to the system and the WiFi standard used. And for an individual, it is difficult to tell the difference between the best processors and to bring the necessary optimizations.

Currently, there are 4 major brands that create CPUs (Processors) for routers: Broadcom, Qualcomm, MTK and Realtek.

There are 3 processor architectures commonly used in these devices:

As individuals, and to keep the explanations simple, I simply advise you to choose a device with a multi-core processor and at least 256 Mb of RAM.

The Multi-core allows the router to process more information at the same time and the 256 Mb of RAM is a minimum for a smooth and fast network.

If you have a particular activity with your networks, such as using a VPN directly on the router or high-level gaming, I advise you to take a high-end router with 4 cores and at least 500Mb of RAM. These activities being more resource-intensive, a more powerful router will be better suited.

The ability of WiFi waves to pass through walls and obstacles depends directly on the power of the router and the gain of the antenna.

Other factors can affect signal range such as router placement, number of antennas, use of MIMO technology, etc.

In addition, good use of the 2.4Ghz and 5 GHz frequency bands also improves the range or throughput for connected devices.

Today manufacturers also offer “dual-band” routers that allow the use of both bands simultaneously. Compatible devices connected at a short range will benefit from the 5 GHz speed and devices a little far from the router will be able to connect to 2.4 GHz.

If you have a small house, this shouldn’t be a problem for you as the WiFi signal range has improved greatly in recent years.

If you have an average home, I strongly advise you to opt for a powerful dual-band (or tri-band) router with plenty of antennas.

Finally, if you have a large house or have thick walls, I suggest you consider a Mesh system rather than a WiFi router.

Manufacturers of WiFi routers have understood that the devices they manufacture remain a mystery for the majority of their customers. To help them make better use of their WiFi devices, manufacturers have implemented simplified configuration interfaces. Thus the majority of routers from major brands available today will guide you step by step to help you optimize your connection according to your needs.

With the latest router models, come many new features. They are no longer simply devices that manage network devices, they are also becoming a full-fledged device by allowing, for example, to connect an external hard drive to take advantage of a NAS on the local network, to install a VPN on all connections.

If you want a router to make particular use of it, I advise you to pay attention that these options are present during your purchase.

It is obviously possible to find recent models that include all these features:

A router adapted to your ISP subscription

It is important to understand first that the speed of your internet connection does not only depend on your WiFi router.

It can also be limited upstream by the subscription you have chosen with your ISP, for example, if you have a 2 ~ 3 Mbps ADSL connection then a Gigabit router will not be very useful to you.

This would indeed allow you to transfer files locally taking advantage of Gigabit speed, but your internet access would still be limited to the 2~3 Mbps provided by your ISP. 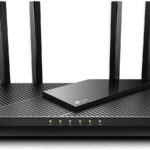 Mashtos is a participant in the Amazon Services LLC Associates Program, an affiliate advertising program designed to provide a means for sites to earn advertising fees by advertising and linking to Amazon.